This tutorial and video show how to implement a use case where custom claims are included in access tokens. The custom claims will originate from domain specific data, and the setup will follow the design principles described in Claims Best Practices. The Curity Identity Server provides a toolbox for providing claims, consisting of a number of separate behaviors, which will be composed together as follows to meet the requirements for the example use case: 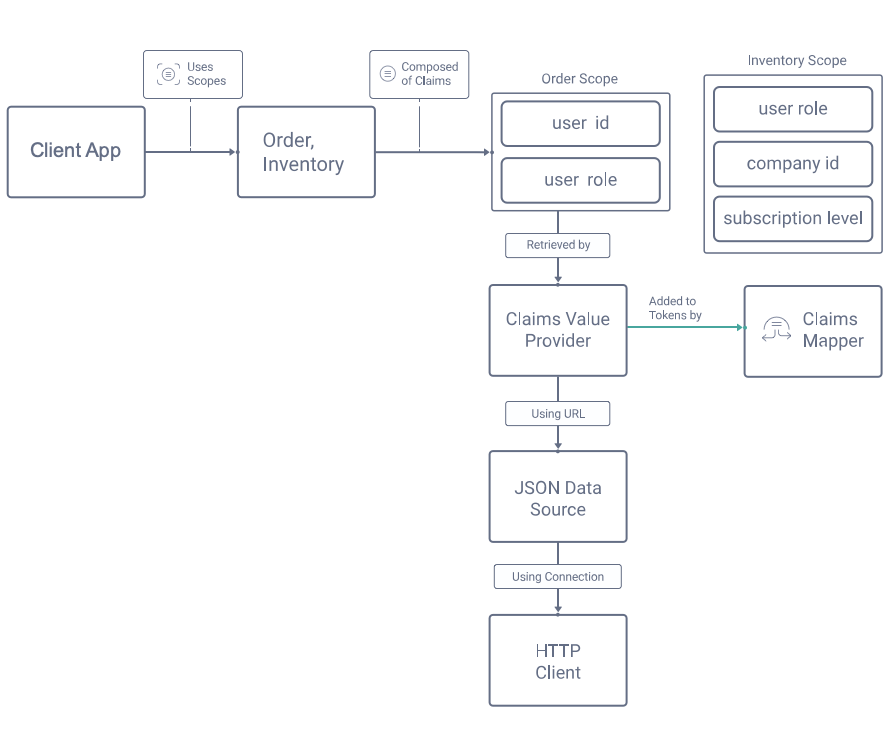 Designing Scopes and Claims in an Access Token the Right Way

This section will describe the design steps needed to include custom scopes and claims in access tokens. This enables your APIs to authorize requests by applying business rules, with only simple code.

The Curity Identity Server allows you to compose claims into scopes, then use a Claims Mapper to say where the claims should be output. All of this is managed in one place in the Admin UI, using the Token Designer window. The below order scope contains claims that allows an API to restrict normal users to their own orders, while granting administrators access to all orders:

The inventory scope has claims the API can use to grant access to different items by business partner, and to allow users with higher subscription levels to purchase additional items. Both scopes are dragged into the access token pane, to ensure that clients who use both scopes are issued access tokens that contain the claims within those scopes:

It is common to include certain claims, such as the user_role above, in multiple scopes, in a similar way to how the OpenID Connect built in email claim may be included in both email and profile scopes.

To provide custom claims to be included in access tokens, one option is to make a simple REST endpoint available in an API. The Authorization Server will call this endpoint at the time of token issuance. In this example the API URL for providing custom claims has the following form, and receives the subject claim in a GET request:

The endpoint will look up the user details and return a payload containing custom claims. These claims will then be issued, then included later in access tokens sent to APIs, where they will become part of the API's Claims Principal:

The above claims are simple strings and integers, but the claim returned can also be a JSON array or object. The Curity Identity Server will then write the same claims format to the tokens it issues.

If a subject claim is received that is not recognized by the API, you can implement any logic you want, though the following two options are perhaps the most common:

This section shows the main steps required to implement the example use case with the Curity Identity Server. The Admin UI is used to wire up claims and to provide them with runtime values based on the authenticated user's identity.

To view claims being issued to clients, it can be useful to temporarily activate the consent screen for the client. When a scope is composed of claims, the Curity Identity Server does not show the scope itself in the consent screen, and instead only shows the individual claims. 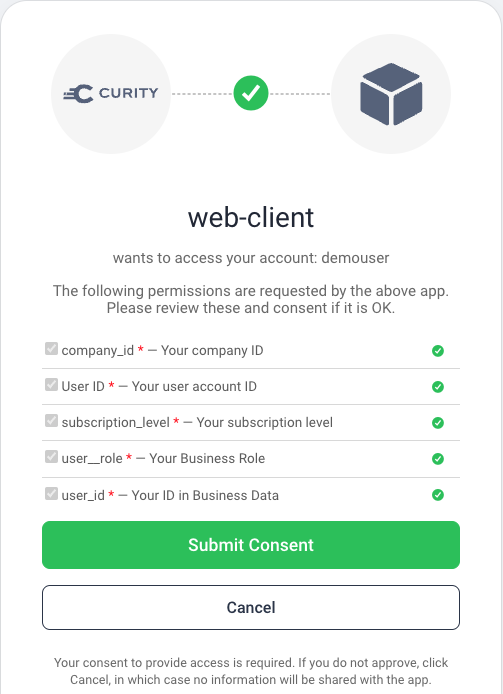 At runtime, claims need to be assigned values based on the user's identity, and this is managed by a Claims Value Provider. There are a number of options, including a scriptable version where you can implement arbitrary logic, but the simplest fit for our scenario is a JSON Data Source. 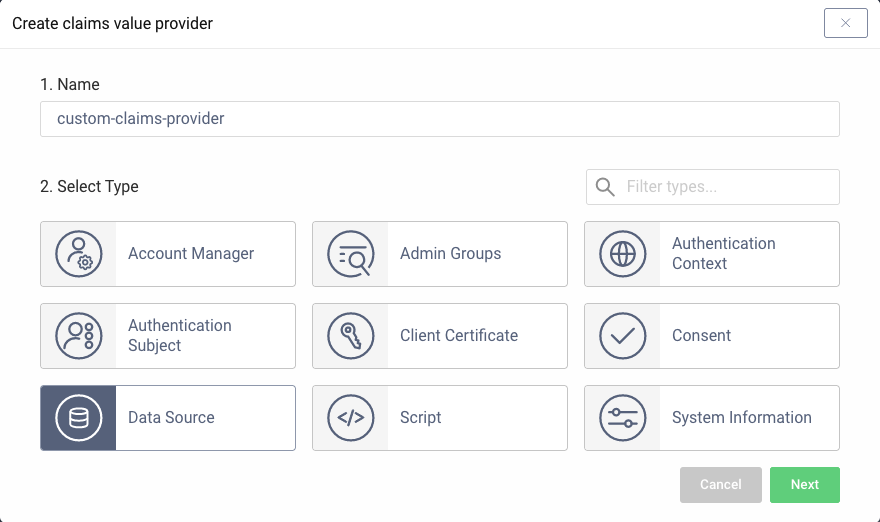 A JSON data source is configured to point to the REST URL within the API that provides custom claims. The below screenshot configures the Curity Identity Server to include the OAuth subject claim in a URL path segment: 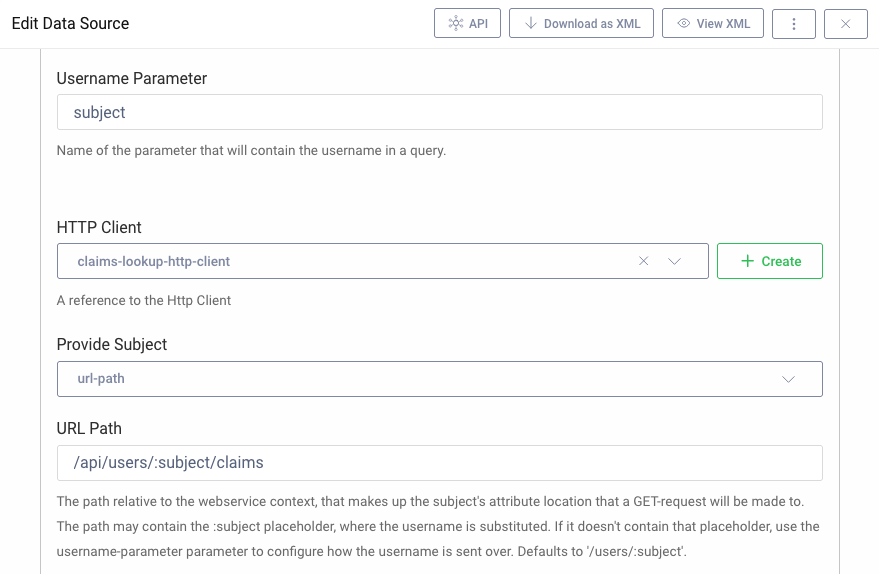 The JSON data source uses an HTTP Client to deal with the connectivity and security details of the outgoing connection. The below example uses Basic Authentication within the back end environment, though more advanced options can also be used: 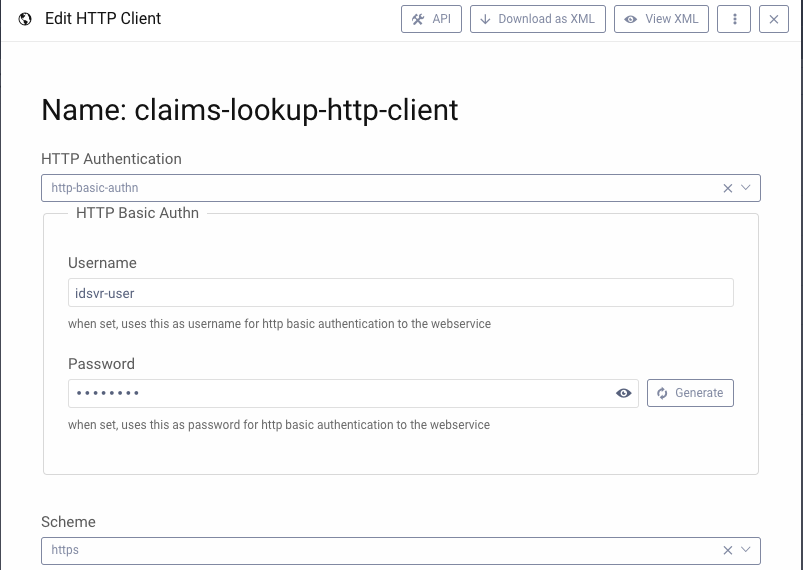 Once the custom claims issuing is complete, the main API endpoints will receive a useful JWT access token. On every request, the API digitally verifies the JWT, to ensure that it has been issued by the Authorization Server, then trusts the claims and can use them for authorization.

APIs will validate the JWT using a library, and after successful validation a ClaimsPrincipal object is typically returned. This will include the custom claims of user_role, user_subscription_level and user_company_id. It is then straightforward for the API to implement its business authorization.

This video provides a step by step guide to including custom claims from your business data in access tokens. The example setup uses an API endpoint to return the claims, which is called by the Curity Identity Server at the time of token issuance.

The Curity Identity Server provides a number of behaviors to enable you to customize claims. These include building blocks of Claims Mapper, Claims Value Provider, Data Source and HTTP Client. Each of these can be customized as required, to provide complete flexibility when issuing claims. All of this provides the simplest and most secure authorization in your API code.