This tutorial shows how to combine OAuth API security with mutual TLS using X509 client certificates. The GitHub repository enables an end-to-end API focused solution to be quickly run on a development computer.

Mutual TLS is a standard security solution for API links between companies, and this can be combined with Certificate Bound Access Tokens to improve upon the strength of normal bearer tokens, to ensure that if an access token is somehow stolen it cannot be replayed by a malicious party.

In some industry sectors mutual TLS is a regulatory requirement, where high worth assets must be protected according to specifications such as the Open Banking Security Profile and the Financial-grade API (FAPI) Security Profile.

The code example will demonstrate the following flow, where two requests are made from a client, and HTTPS traffic is routed via a reverse proxy to both the Identity Server and the API:

The flow consists of the following main steps, which ensure that only the party that owns the client certificate and key can access API resources:

The example first requires the following prerequisites to be installed:

Clone the GitHub repository and inspect the files, which consist primarily of a very simple API and some deployment resources: 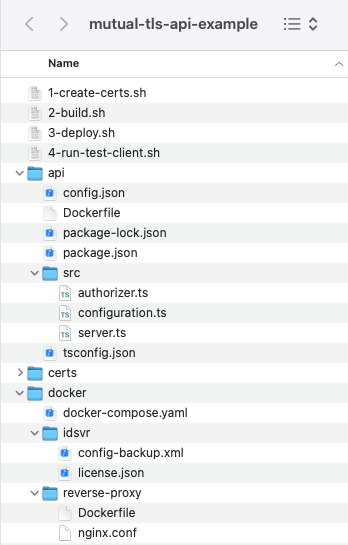 The example uses certificates that are created by running the following script. In a real world setup these would be issued by a trusted third party authority. The What is Open Banking? article describes how eIDAS certicates are required in European Open Banking.

To keep the infrastructure fairly simple, only three certificates and keys are created:

Next add the following entries to your hosts file, to represent public URLs used by the business partner client:

The following URLs are used, so that there is only a single external port of 443, which is usually the case in production API setups:

Next build the code and Docker containers via the following script:

Before deploying the system, ensure that you have a valid license file for the Curity Identity Server, and copy it into the docker/idsvr folder, then run the deployment script:

The example client is a very simple bash script that runs curl commands, to authenticate, then to call the API, with all requests using mutual TLS:

The test client simply makes secure connections and outputs the following text, though there is some complexity in the infrastructure setup, which is described in the following sections:

Open a browser and enter https://localhost:6749/admin to access the Admin UI of the Curity Identity Server and sign in with admin / Password1. Then navigate to Profiles / Token Service / Clients and note that there are two OAuth clients configured: 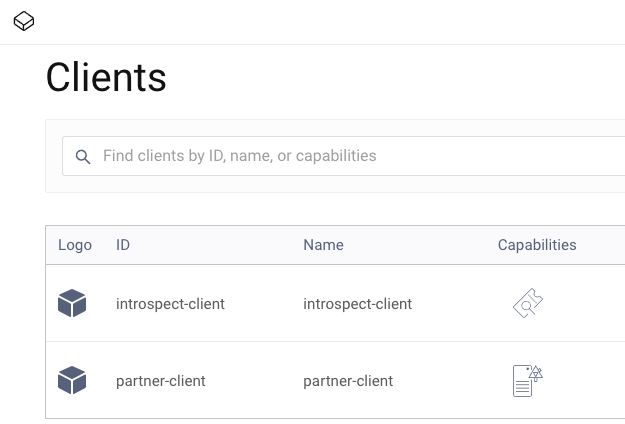 The first of these is an introspection client used by the reverse proxy to implement the Phantom Token Pattern, to swap opaque access tokens from the client for JWT access tokens to forward to the API.

The second client is more interesting, since it uses the Client Credentials Flow with a client certificate as the client secret, meaning that the sender needs to provide proof of the private key in order to authenticate: 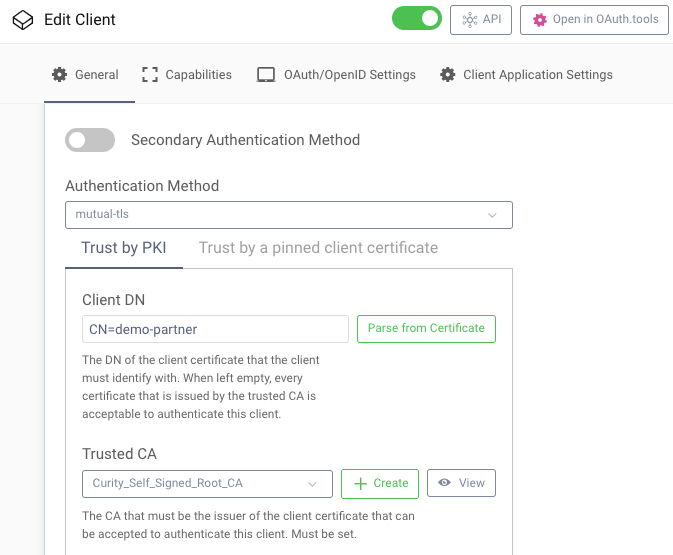 In order to authenticate and get an access token, the partner client will call a token endpoint where mutual TLS is used, and in a curl request this contains the following parameters:

Companies will want to ensure that mutual TLS clients do not cause any problems for web or mobile clients that need to interact with a token endpoint. The example setup manages this by configuring a second token endpoint with a different path:

The Curity Identity Server supports multiple ways to configure mutual TLS and validate client certificates. These include terminating TLS at the reverse proxy or using a dedicated port for mutual TLS. See the Token Service Admin Guide for full details on supported configurations.

For authentication requests, NGINX is configured to receive requests at the transport layer, using the NGINX Stream Module. This means requests are not decrypted and that TLS is terminated at the Curity Identity Server, which will verify the client certificate.

For API requests, the reverse proxy manages SSL termination and verifying the client certificate, which is done using the NGINX HTTP SSL Module via the ssl_verify_client and ssl_trusted_certificate directives.

After the client has authenticated it will call the API, providing both an opaque access token and proof of ownership of the client certificate and key:

These are configured as follows and run in this sequence, so that the JWT is produced by the first plugin and then used by the second plugin:

The JWT returned after introspection is a certificate bound access token due to its cnf/x5t#S256 claim, which contains the thumbprint of the client certificate used at the time of authentication. The mutual TLS secured API also uses JWTs signed with a PS256 algorithm, since this is a recommended algorithm from FAPI Specifications:

The sender constrained token plugin then calculates the thumbprint of the client certificate in the current API request and compares it to the JWT value. If these do not match a 401 unauthorized response is returned:

Due to the work of the reverse proxy, the security code in the example API is very simple and just involves standard verification of the JWT. The code example uses the JOSE library, so that only a few lines of code are needed, after which the claims can be trusted for authorization:

In some setups you may prefer to verify the token's certificate details in the API rather than in the reverse proxy. To enable this for our example setup the nginx.conf file would be updated to forward the client certificate to the API via an HTTP header, using NGINX's ssl_client_escaped_cert variable:

The API itself would then need to use crypto libraries to calculate the SHA256 thumbprint field of the certificate according to RFC8705. The code example uses Node.js so it could achieve this via libraries such as Forge and base64url: