This code example implements techniques to validate a Self Contained JWT used by a serverless API deployed on Vercel.

Vercel Serverless APIs do not have the ability to cache JWKS keys in memory. By default, this would result in a call to the JWKS endpoint of the Curity Identity Server on every API request which would impact the performance of the system. With a self-contained JWT the API has what it needs to fully validate the JWT without the need for caching or external calls to the Curity Identity Server.

The API is a simple Node.js API that uses the Jose library to perform signature validation using the EmbeddedJWK method. The API then returns a message that the JWT has been successfully validated together with a set of random data.

Next ensure that the OpenSSL Tool is installed, which is available by default on some operating systems, then run the createCerts.sh script. This will create a number of self signed certificate files for demo purposes, to simulate a Public Key Infrastructure (PKI) on a development computer:

The signing certificate will be imported into the Curity Identity Server, and the intermediate and root certificates will be deployed with the API, which will use a Public Key Infrastructure library to verify the trust chain of received tokens.

In the Curity Identity Server, import the signing certificate under the Facilities menu and select the Signing Keys / New option, then import the P12 file and enter its password: 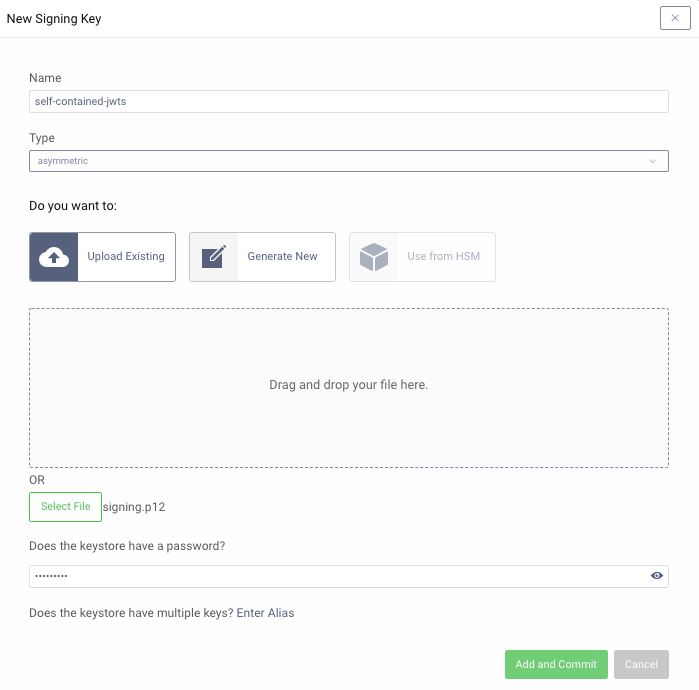 Then view the signing key details and notice that it contains a full certificate chain that will be included in JWTs issued: 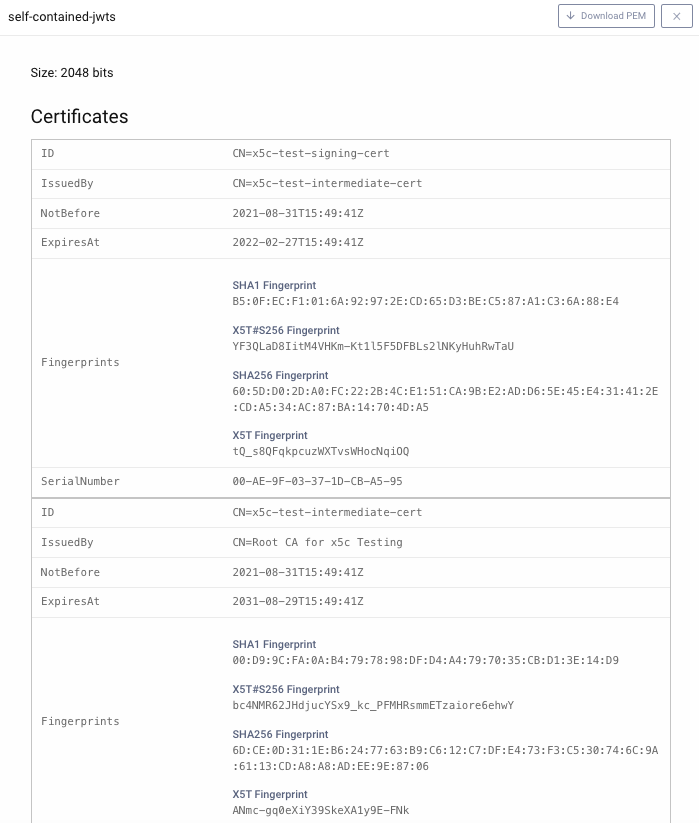 Finally, navigate to Profiles → Token Service → Token Issuers and select the imported signing certificate, and either activate the Include X509 Certificate Chain or the Include Jwks option:

This will result in the JWT header of access tokens being updated with the certificate chain:

This results in a full jwk field being received in the JWT header, which also includes an x5c field:

This example code uses the Include JWKS option and would have to be modified slightly to work with the Include X509 Certificate Chain (x5c) option. The Securing a Serverless API with JWTs code example implements the x5c option.

When using embedded JWKs it is also important to perform extra validation of the jwt.x5c field against whitelisted issuers that are deployed together with the API.

The example API loads the certificates data into a truststore.

The truststore is then used to verify the certificate chain provided in the received JWT. With this check, the API can trust that the token has been issued by a valid Authorization Server.

Deploy to the Vercel Cloud

Start by cloning the GitHub repository. Install the dependencies, then use for example the Vercel CLI to deploy the code.

The ISS, AUD, ALG and CERT_LOCATION environment variables are passed as arguments when the API is deployed to Vercel. This could optionally be handled in the Vercel Web UI instead.

Note that AUD by default is the ID of the client that has issued the JWT that the API receives. This behavior could be changed in the Curity Identity Server.

Optionally add --prod at the end of the command to directly deploy the API to production.

The result of the deploy command provides a preview URL that can be used to test the deployment.

Using OAuth.tools, run a Code Flow to obtain a JWT. The Custom Token Issuer article outlies how to configure a specific client in the Curity Identity Server to issue JWTs as access tokens.

Then run an External API flow in OAuth.tools. Point the request to the Vercel domain and add the /api path.

The response will note that the JWT validation was successful, and some random data is returned.

Serverless providers such as Vercel deliver convenient internet hosting for APIs, though they come with certain limitations, such as an inability to cache JWKS keys in memory. With self-contained JWTs however, it is possible to implement a performant Zero Trust architecture where the API validates JWTs on every request.