This tutorial shows how to run a code example that implements mobile OpenID Connect in a Swift App using the Hypermedia Authentication API (HAAPI). See also the API Driven Demo Client tutorial for an introductory guide that runs a simple web client.

The code sample consists of an initial Unauthenticated View used to trigger the sign-in, but before a login attempt is allowed, the app must cryptographically prove its identity using Client Attestation:

The authentication workflow is then managed as a series of fast API requests that return JSON responses. The mobile app processes each API response to perform various actions including the rendering of forms: Once authentication completes, the app presents its Authenticated View, to simulate a mobile app that works with access tokens to call APIs. The app can then easily perform other OAuth operations such as refreshing tokens and ending the authenticated session: 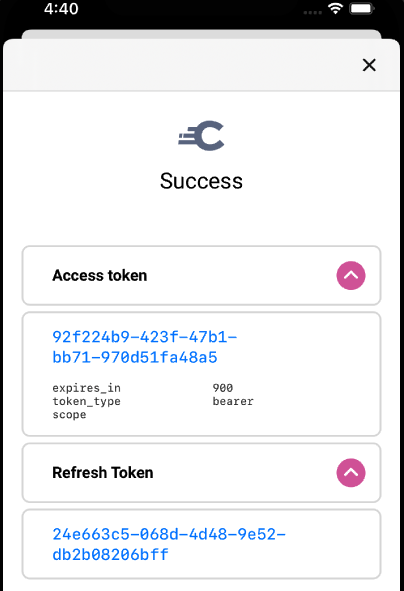 First, ensure that you are running an up-to-date version of Xcode, then clone the GitHub repository and open its folder to view the Swift classes used.

The easiest way to run the code example is to point it to a deployed and preconfigured instance of the Curity Identity Server, running in Docker. This is done via a script included with the example that is explained in the Mobile Setup how-to:

The result is a working instance of the Curity Identity Server, listening on localhost: https://localhost:8443, ready for the mobile app to connect to. The Admin UI is also available and can be accessed using the following details:

Deploying the Curity Identity Server with a Remote URL

It will sometimes be necessary to access the instance of the Curity Identity Server remotely. E.g., when you want to test the mobile app from a physical device, that is not connected to the same network where you run the server. You can use the ngrok tool to quickly expose local applications on the Internet. You can edit the start-idsvr.sh and stop-idsvr.sh files to use ngrok (set USE_NGROK=true). This will result in exposing the containerized instance of the Curity Identity Server under a random domain similar to https://87ce095409f9.ngrok.io. Should you use this option you will have to update the apps' configuration (see Updating the App Configuration).

If you want more control over exposing the Curity Identity Server with ngrok, then have a look at the Exposing with ngrok tutorial.

The code example requires a client with the following settings, and the HAAPI specific settings are explained in the iOS HAAPI SDK article. This includes configuration of Client Attestation settings for development so that the app must prove its digital identity before it is allowed to attempt to authenticate end users. Note that client attestation for emulated devices does not work so validation is usually therefore disabled initially.

In XCode, the demo app's configuration settings are specified in the Demo/Settings/Profile module. If using the quick start, you can just use the default values.

If you deployed the Curity Identity Server with ngrok, or have your own configuration, then you need to provide the details to the app configuration.

This can be achieved in two ways.

Once the above configuration is complete you are ready to run the app and use whichever authenticators and users you have configured in the Curity Identity Server. In the following sections, we will explain the key technical behavior implemented in the code example.

Integrating the Hypermedia Authentication API is done in three layers summarized below. Curity will be providing libraries for the view layer in the near future so that integration requires very little code:

When authentication is first triggered, the app sends a number of low-level messages to prove it is the genuine app, based on the digital identity with which the app is signed and delivered to the App Store.

This must be done before the app is allowed to attempt to authenticate the user. The main request to prove the client's identity is a client assertion request with the following parameters:

The server verifies these details and returns a JWT access token in a JSON response that must be sent with subsequent requests in the authentication workflow, along with a separate proof of possession token. See the HAAPI Whitepaper for further details on security.

Once the client is attested it can start authenticating the user, which is done using standard OpenID Connect parameters, but with a custom accept header to indicate that the client wants to receive hypermedia responses. The HAAPI models iOS SDK exposes a HaapiManager class which is used to communicate with the Curity Identity Server. The manager exposes these relevant methods:

Response models can be processed in a generic way within the mobile app to deal with finer-grained work such as rendering the set of fields within a form model. Have a look at the Views package group of the sample app to check how such rendering could be implemented.

Eventually, the manager will return an OAuthAuthorizationResponseStep, which signals that the authentication has finished, and the app can now obtain access, refresh, and ID tokens from the Curity Identity Server. This can be easily done using the OAuthTokenManager object. The token manager exposes two methods: fetchAccessToken and refreshAccessToken.

For further detail about the requests and responses used by the Hypermedia Authentication API, see the HAAPI Data Model, which provides full details on schemas for all areas, including authentication, consent, polling, and error responses.

Once the client obtains an access token it will use it to call APIs in the standard way, by sending them as bearer tokens in the HTTP Authorization header. When the access token expires, the refreshAccessToken method of the token manager is used to get a new token.

Logout can be implemented in a simple manner, by just removing tokens from the app and redirecting the user back to the Unauthenticated View. Subsequent sign-in behavior can then be controlled via the following OpenID Connect fields. This can also be useful when testing, in order to sign in as multiple users on the same device:

The Hypermedia Authentication API provides a number of benefits to mobile apps, in terms of both financial grade security and login usability: