This tutorial and video explain how to run an end-to-end code example for a Single Page Application (SPA) that implements OpenID Connect via the Token Handler Pattern. This provides a Backend for Frontend (BFF) for the SPA, and also provides a very clean separation of web and API concerns. There are quite a few moving parts that need to be understood though.

In recent years it has been common to implement OpenID Connect for SPAs solely in Javascript. This is no longer recommended, as explained in the OAuth for Browser Based Apps specification, for two main reasons:

To solve these problems it is now recommended to use a Backend for Frontend approach, where the SPA security is routed via a back end component that can manage token storage and issuing of secure cookies for the browser.

The example SPA will use a Curity Token Handler that provides extra REST API endpoints, to call the Authorization Server on behalf of the SPA. The token handler will issue application level secure cookies that can be used from the site of the SPA’s web origin. All of the good features of SPAs will be maintained, and combined with browser security equivalent to that of a website based app:

The end-to-end solution for an SPA now includes a couple of extra components, illustrated below:

The Token Handler consists of two toolbox components, and most work is done in the first of the following two components. Software companies should not need to develop either of these, and is it recommended to instead plug in a tested third party implementation:

Curity provide an initial implementation of the toolbox components, which customers can use to implement their SPA security. At the time of writing, these components are at a demo level to enable the design patterns to be understood.

If these components do not meet your needs they can be adapted as required. The solution is not Curity specific and these components will work with any standards based Authorization Server.

First ensure that you have both NodeJS and Docker Desktop installed, since these components will be used to build and deploy the browser and API code.

The code example uses the following test domains as one possible deployment setup:

These domains must first be added to your /etc/hosts file as follows:

For SameSite cookies to work, the Token Handler components must be hosted on the same parent domain as the SPA's web origin, and the code example uses a value of `example.com`.

Clone the repository with the following commands:

Then view the code components and note that these all require only simple code. The Code Example article describes how the OAuth work for the SPA is implemented.

Next run the build script, which compiles the code for all components and deploys it to Docker images:

Note that this also downloads and builds the Token Handler’s (OAuth Agent) API within the code folder, and you can study its code or adapt it if required:

Before deploying the system you will need a license file for the Curity Identity Server. If you do not have one you can get a free community license from the Curity Developer Portal by signing in with your GitHub account.

The deployment folder contains these components in total:

These are all deployed to a development computer via a Docker Compose file:

The entire system can be deployed via the following commands:

This script downloads two reverse proxy plugins to the deployment folder, and you can study or adapt plugin behaviour if required. We will look at this plugin’s behavior shortly:

Browse to the SPA

You can then browse to http://www.example.com to run the SPA, which will initially present an unauthenticated view:

You can then sign in with the test user demouser using password Password1, after which an authenticated view is displayed. The SPA can then download user info from the token handler’s userInfo endpoint and can also securely call the Example API:

Next test some multi tab and navigation operations. These areas can sometimes be a source of problems for web OAuth solutions, but note that the code example handles them reliably:

While using the system you can look at logs to understand what is happening in the OAuth Agent or OAuth Proxy components: 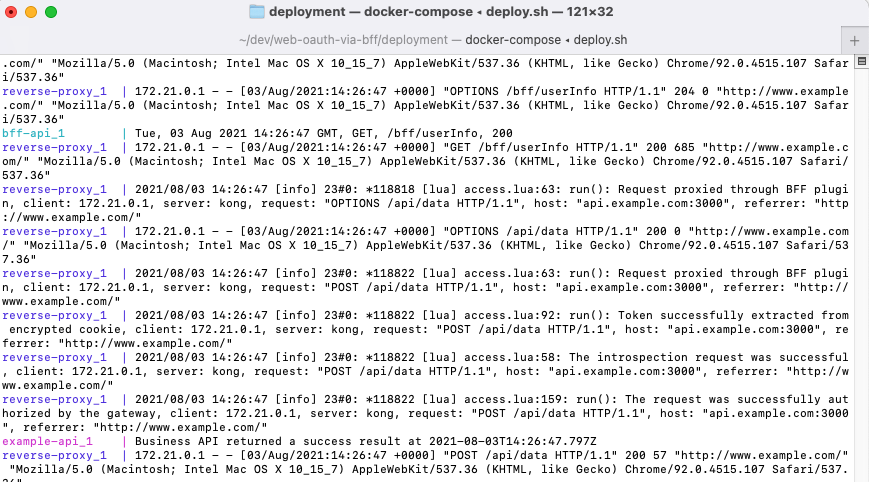 When troubleshooting, it can be useful to view the log output of only a specific component in its own terminal window. The following standard Docker commands can be used for this:

The security used by the Token Handler and SPA is equivalent to that used by a website based app, with these main characteristics:

Using a Token Handler does not provide better security than a traditional website app, but provides a better separation of concerns, leading to simple code, best usability and the ability to deploy to a Content Delivery Network (CDN).

Web developers will need to run the token handler on their workstation, and the preferred way to do this is to use a Docker container. Curity expect to provide additional options for developers in future, such as integrating with the Webpack Dev Server.

The token handler returns an Authorization Code Flow + PKCE request URL to the SPA, with parameters similar to these:

After login, the token handler sends a request payload similar to the following to the Curity Identity Server, to exchange the code for tokens:

These messages improve upon the security of older SPA solutions, since a client secret can be used, and since no tokens are used in the browser.

In total the token handler uses 5 different secure cookies, with different data in each. Each of the cookies are strongly protected using AES256 symmetric encryption, with the encryption key known only by the server:

All cookies have the following properties, though the paths of the refresh and ID cookies are restricted to only the token handler endpoints where they are needed.

Note that the SPA origin is www.example.com but that cookies only need to be issued to the API domain at api.example.com, which is in the Same Site. An SPA should not need to send cookies during web requests, so it is preferred to limit the scope of the cookie to API requests. If you have particular requirements then the cookie domain can be extended to .example.com and also sent during web requests. Note however that this increases the potential for this type of usability problem:

You can login to the Admin UI to view the OAuth client settings for the SPA, using these connection details:

The spa-client settings are only used by the token handler, which uses the following Curity configuration settings, which are equal to those of a website app:

The OAuth security in the code example follows current best practices for browser security, but of course this does not make your app fully secure. Software companies must also follow a security development lifecycle, and in particular protect against Cross Site Scripting (XSS). If there is an XSS vulnerability then secure cookies could be abused by an attacker to steal data.

Once authentication has been completed, the SPA will make API calls to access data, as described in the Code Example article. Your APIs will expect to receive JWTs and the usual way to manage this is via the Phantom Token Pattern.

For SPAs we now have an additional requirement, to decrypt the secure cookie and enforce CSRF checks before the phantom token pattern runs. The overall workflow will look like this:

The reverse proxy is the preferred place to implement this type of utility operation, rather than complicating your API code. The kong.yml configuration for the code example focuses only on the routing of web requests to a single API:

The plugin components are implemented in the lightweight LUA Scripting Language and run in this sequence:

The only new reverse proxy component is the OAuth proxy plugin, which deals with decrypting cookies and forwarding the access token. For data changing commands, the plugin can also verify that a CSRF request header matches that in the CSRF cookie.

The example API included with the code example requires a valid JWT for every API request, and returns a 401 error if this is not the case. The below Get Data button allows API calls to be tested all the way through, and you can view reverse proxy logs to see the plugins being used:

The deployment setup for the code example consists only of a bff path and a single api path, in order to explain the routing mechanics. Real world systems often deal with multiple web domains, multiple types of client or alternative technical setups.

In some companies the microservices are hosted on a domain such as api.example.com but the web apps are hosted on branded domains named after products. In this setup an additional API domain would be spun up, as a child or sibling of the web domain:

The token handler’s OAuth Agent can be implemented and deployed in various forms and some examples are listed below. Curity will be providing additional implementations in order to give software companies additional choices.

We recommended implementing the OAuth Proxy within a reverse proxy or API gateway rather than in your API’s own code, since these components have proven routing and high throughput capabilities.

Using the Token Handler Pattern means that there will be different entry points to microservices for web clients and other clients. This type of setup is quite common already for APIs that require Mutual TLS connections from business partners:

A reverse proxy makes it easy to support multiple API security models via different entry points, but without impacting underlying microservices. A possible configuration for an Orders API is shown below, where the reverse proxy manages the different entry points, so that the API receives all requests on the same URL and only needs to work with JWTs:

The following video visually shows how to deploy the code example, then uses the deployed system and explains some further details:

We demonstrated an end-to-end solution where the main components a company develops can continue to be implemented in a simple and standard way:

Meanwhile the more complex plumbing was implemented once as Curity provided toolbox components, which would need to be deployed for each of your web domains. This separation of concerns leads to web apps that uses modern and recommended security. The separated architecture is then very easy to scale and extend.

Keep up with our latest articles and how-tos RSS feeds.