When companies decide on a hosting strategy for their software platform, they must account for several high-level factors:

This article will describe how to deploy the Curity Identity Server across multiple datacenters and regions. The options chosen depend upon the specific problems the company is trying to solve.

Hosting in an OAuth architecture typically requires three main types of HTTPS endpoint called by apps: Web Content, APIs, and the Authorization Server. The company will also design URLs and domain names to provide these endpoints:

For the system to be highly available and perform well, the components then need to be scaled. Also, the data used by the APIs and Authorization Server needs to be managed reliably overtime to meet regulatory requirements.

A basic form of production hosting is to ensure at least two instances of each component type, except for data sources, which are frequently backed up. This could be hosted on-premise, although it is more common these days to deploy to the cloud, often using containers and Kubernetes.

For the Curity Identity Server, the components are illustrated below. We recommend driving the deployment from configuration:

The admin node should not be exposed to the internet. This is usually managed via network segmentation. The end result is that the admin node is only available when authorized company employees are connected to their work network.

Runtime nodes are independent and never call each other, meaning that they remain in a working state even if they cannot connect to the admin node. This provides a simple deployment design that scales well to any type of global cluster.

For any systems that deal with data sources, it is recommended to host the actual nodes behind a reverse proxy rather than exposing the nodes directly to the internet.

Therefore, a company hosting within a single region would require only a fairly simple Identity Server deployment, where internet apps send OAuth requests via the reverse proxy's public URL.

It is common to use built-in support from cloud-native platforms such as Kubernetes to manage nodes as production conditions change. The below areas can then run without manual human actions to help ensure the system's availability:

The Curity Identity Server provides the following built-in Monitoring Capabilities that can be called by the cloud platform:

Although the above infrastructure has some great reliability, it may not cope with certain events, such as a hurricane that brings down electrical power for an entire region.

If your company needs to guarantee that the software keeps working under these conditions, a typical pattern is to failover to a different region.

This is reasonably easy to achieve with a cloud platform since you would use scripting such as Terraform to automate deployment to both locations. You would then need to keep the configuration data up to date in the passive location when it changes in the active location:

When using a single-region deployment, the overall system is likely to be considerably slower for users in remote countries. Companies targeting a global user base will likely want performance to be roughly equal for all users, so they may decide to extend their hosting to three or so locations.

One hosting strategy is to use Global Server Load Balancing (GSLB), where end users are routed to the geographically closest endpoints. This type of load balancing is usually also accompanied by data replication so that all regions eventually end up with the same data.

To include the Curity Identity Server in this type of global deployment, its components should be deployed as illustrated below.

We recommend that companies store Personally Identifiable Information (PII) about end users in the Curity Identity Server, as described in the Privacy and GDPR Article.

However, replicating this type of data could break newer laws in some regions, where companies can only store personal data on servers within the user's country.

Companies must carefully consider regulatory aspects before replicating sensitive data across legal boundaries. In these cases, a solution based on Global Subclusters or Dynamic User Routing may be preferred.

In the following sections, we will assume there are no such legal barriers and describe how to reliably cluster the Curity Identity Server across regions.

Data in the Curity Identity Server

Architecturally, we separate data into these main types:

Companies running a clustered setup will need a database for at least the first of these, and can use either a SQL or NoSQL schema. Database and LDAP software used in a global cluster must support active-active replication, ensuring eventual consistency. Replication times for databases are typically fast, such as a few seconds, whereas global LDAP replication may take several minutes.

The below table provides further information on particular areas of data within the above schema:

Users will be routed to the geographically closest Curity Identity Server node, but occasionally they may be routed to another region, which could happen for various infrastructure-related reasons. Companies will want to ensure that this does not lead to a poor user experience for their end-users, and we recommend testing the following scenarios in your setup.

The API Gateway used with the Phantom Token Pattern also contains data, most commonly an access token cache, where it is common to store a hash of recently received access tokens.

If users get routed to a different region, tokens can be used normally in the new region. This is because the gateway will just re-introspect the token, which will succeed due to replicated token data. 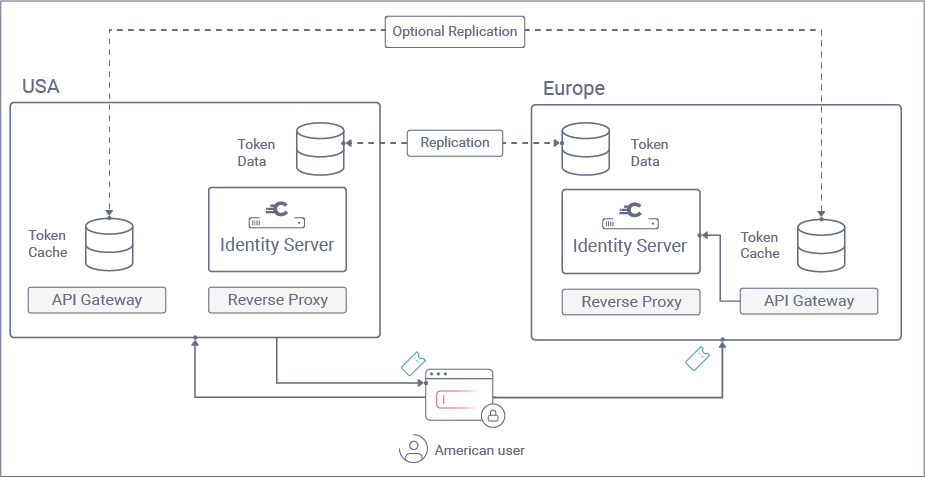 Some advanced API gateways have their own features for synchronizing data across gateway nodes, and some companies may want to enable the following type of behavior:

We recommend coding OAuth client applications to handle 401 error responses from APIs in the standard manner: refreshing the token and then retrying the API request. This can help to ensure a good user experience in some infrastructure scenarios.

An example is illustrated below, where the Split Token Pattern is used, with a gateway that does not support token cache replication. The user has been authenticated in one region and is then redirected to another region.

The end result is that the application has resiliently coped with re-routing via simple and standard code. The switch is seamless for the end-user, who does not experience any technical problems or additional browser redirects.

To resolve these problems, data will need to be partitioned rather than replicated, and one option is to use region-specific internet URLs: 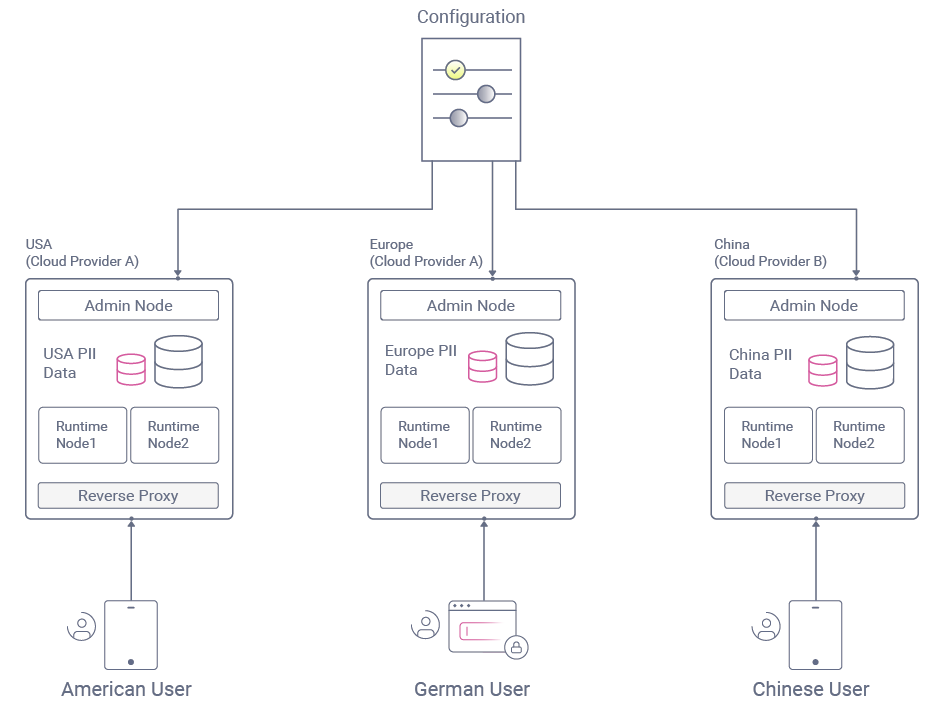 Global deployment may also require a multi-cloud capability, where some countries require a different cloud provider. The Curity Identity Server is designed to be provider-agnostic and deployable to any cloud. Once you are up and running in one location, extending your deployment automation to other providers is straightforward.

It is possible to take closer control of a global deployment via reverse proxy routing. This enables you to run a single global system, with user data partitioned by region but without the need for data replication. Instead, users are always routed to instances of the Curity Identity Server running in their home region. 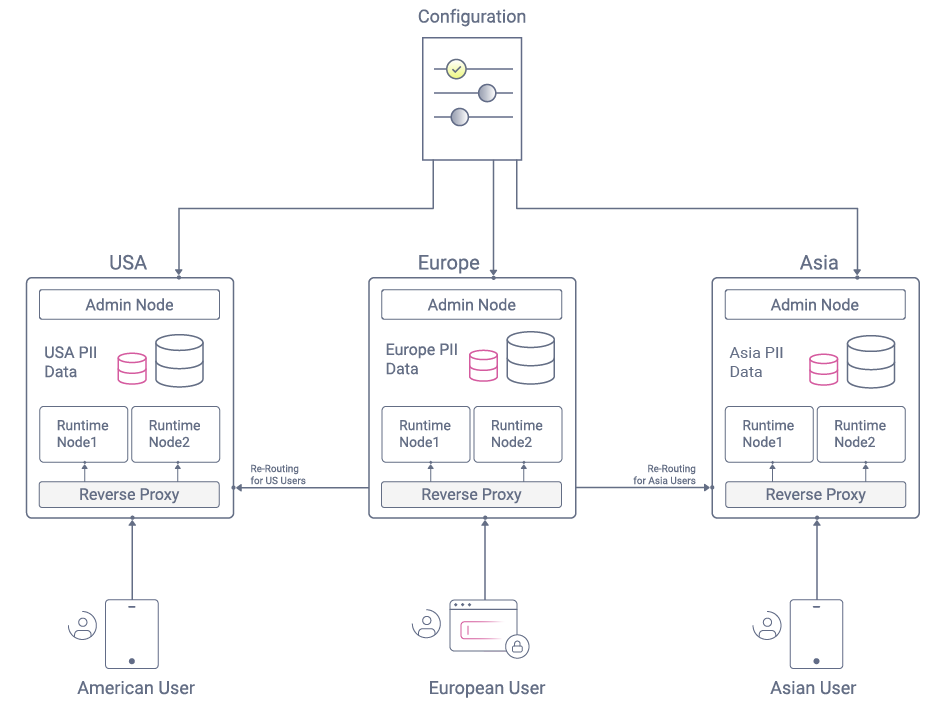 For further details on this design pattern, see the following articles:

The Curity Identity Server can be deployed to any platform, then clustered to meet your global software needs. This enables companies to achieve their software hosting goals: